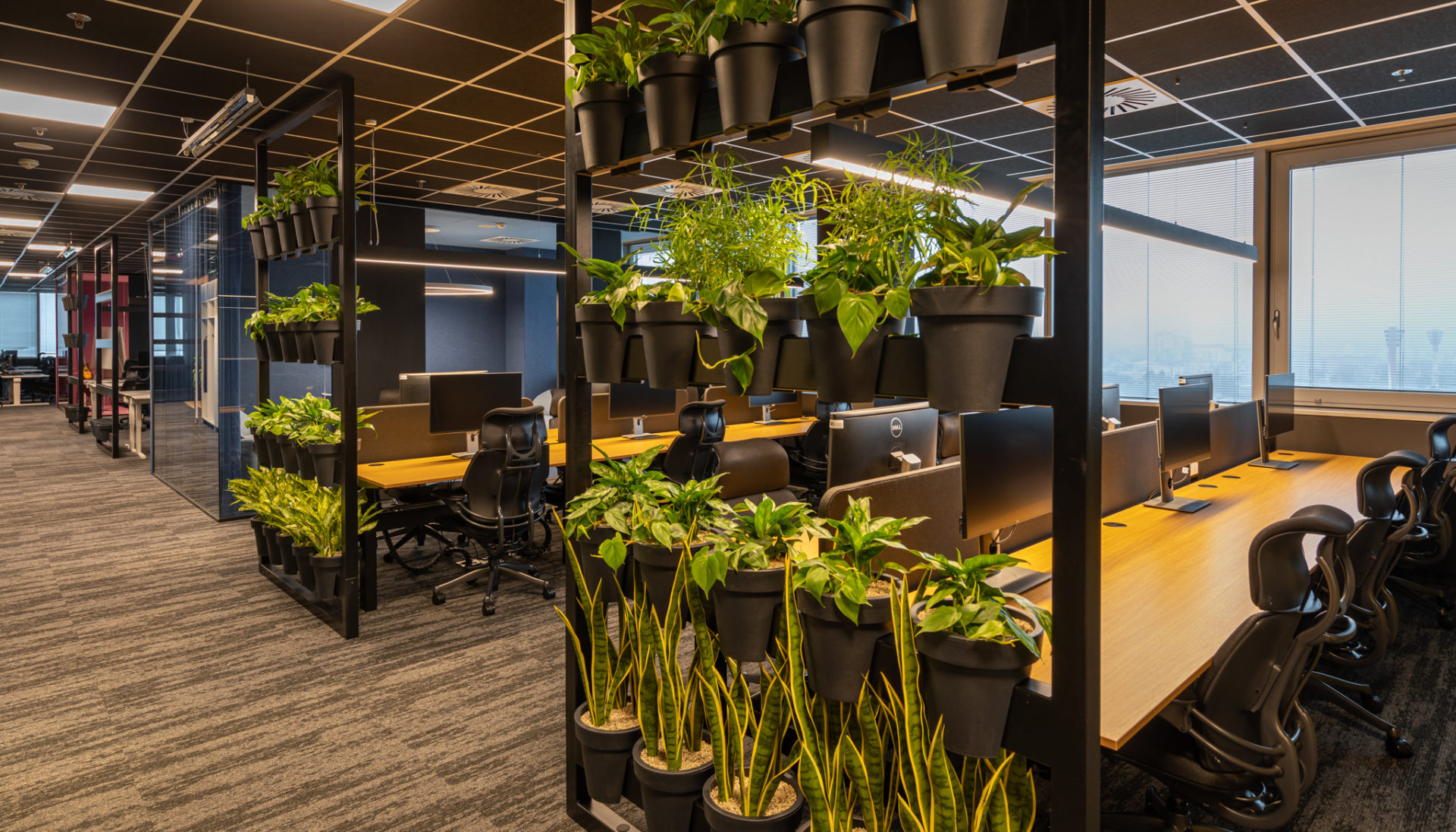 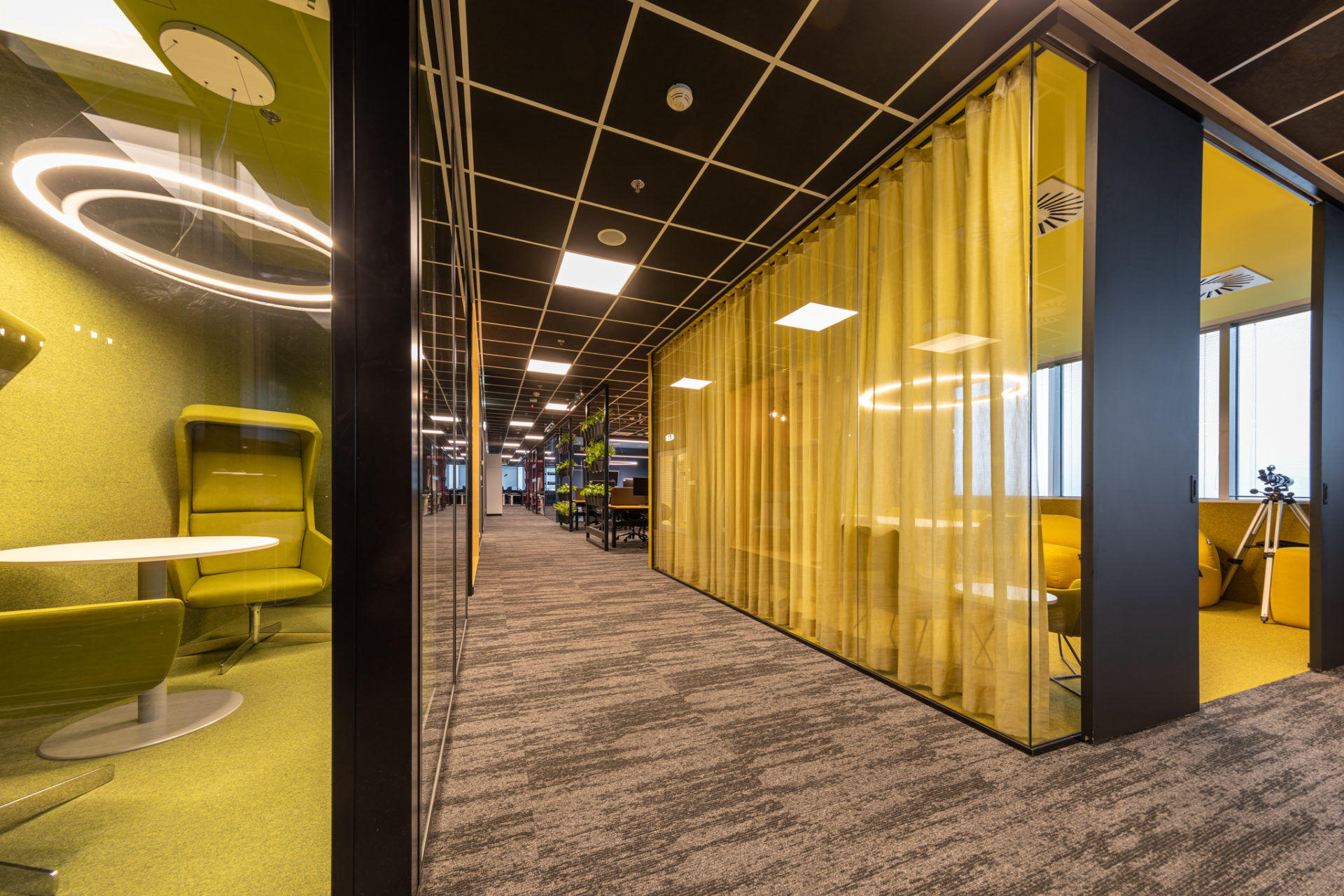 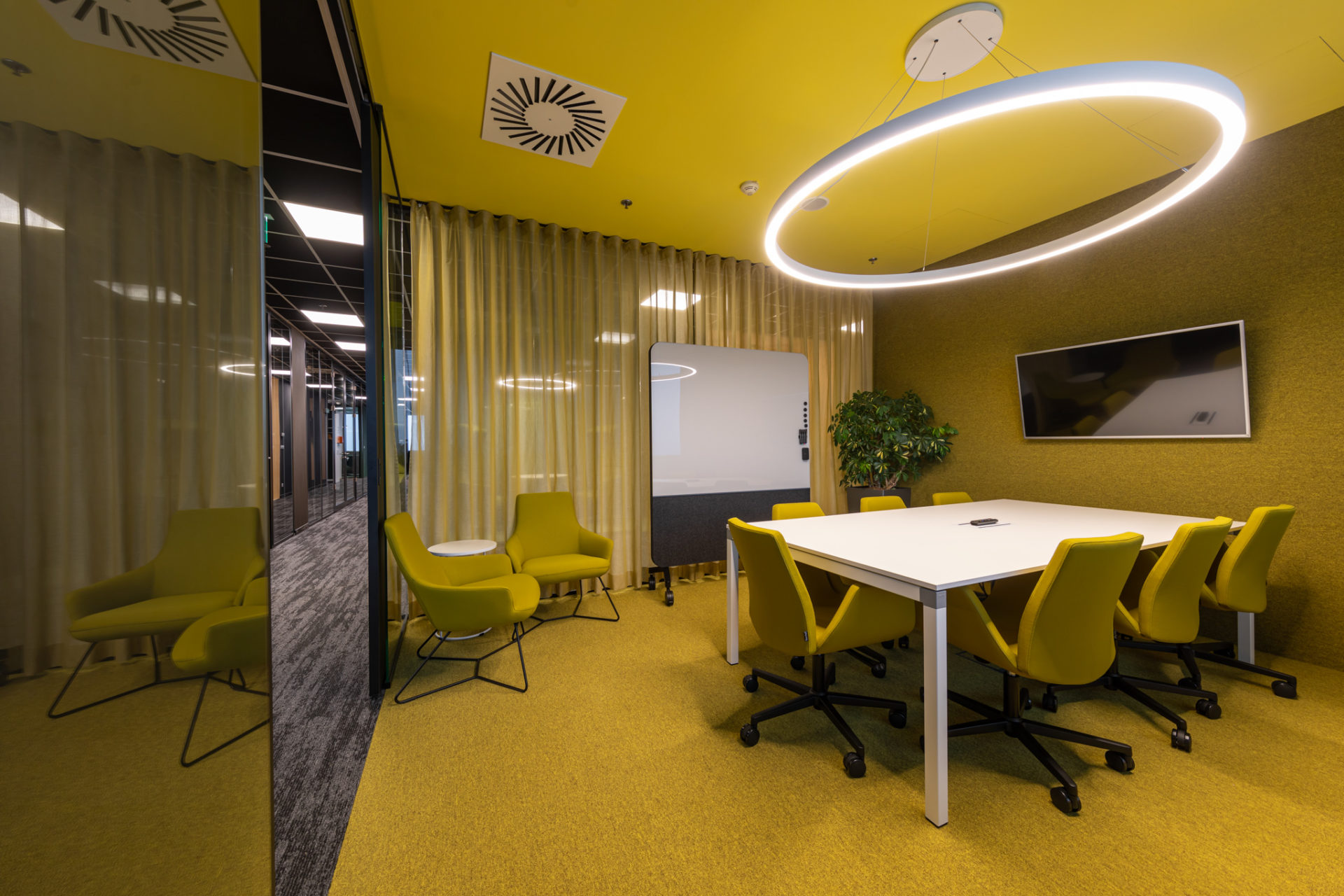 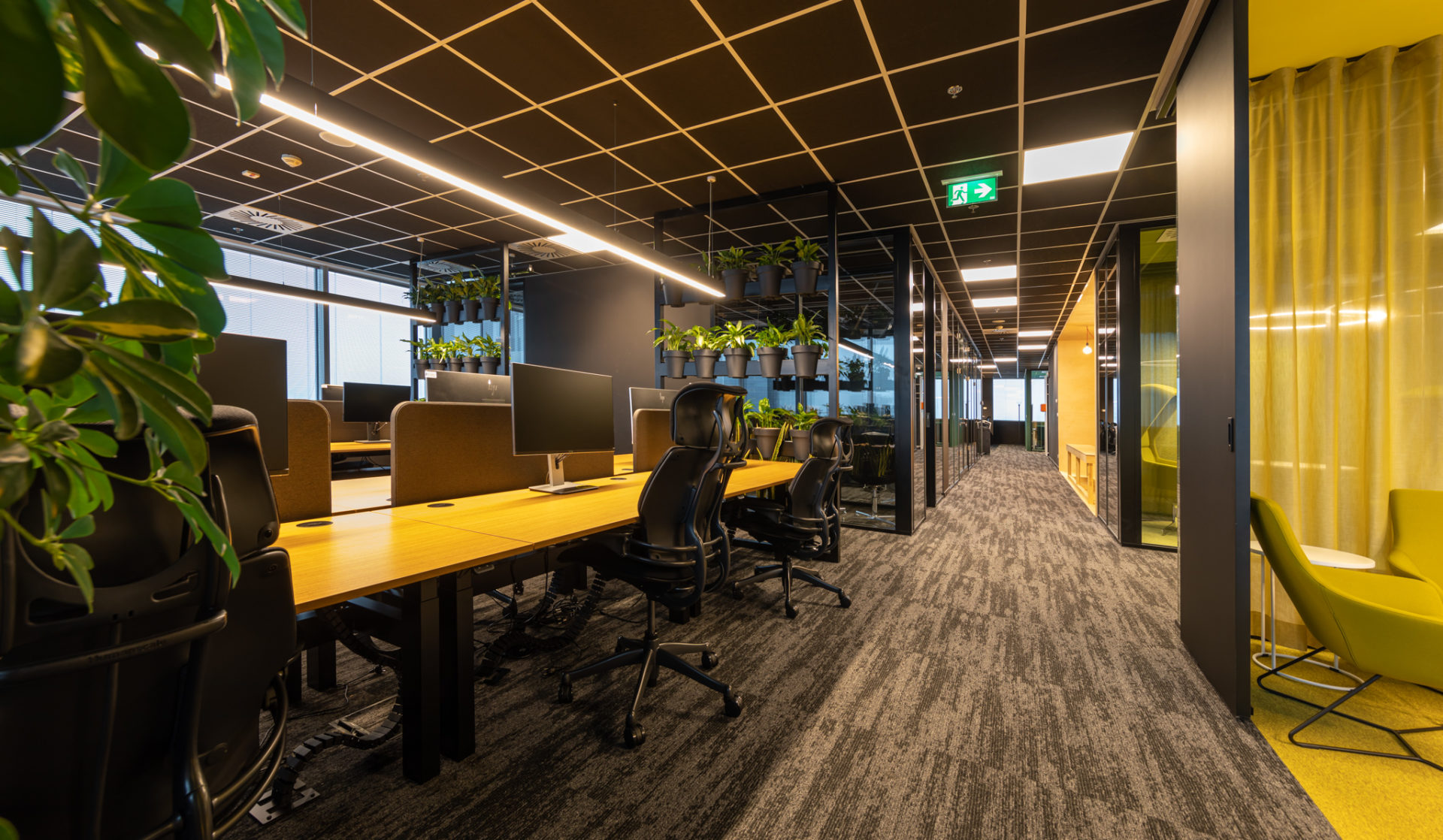 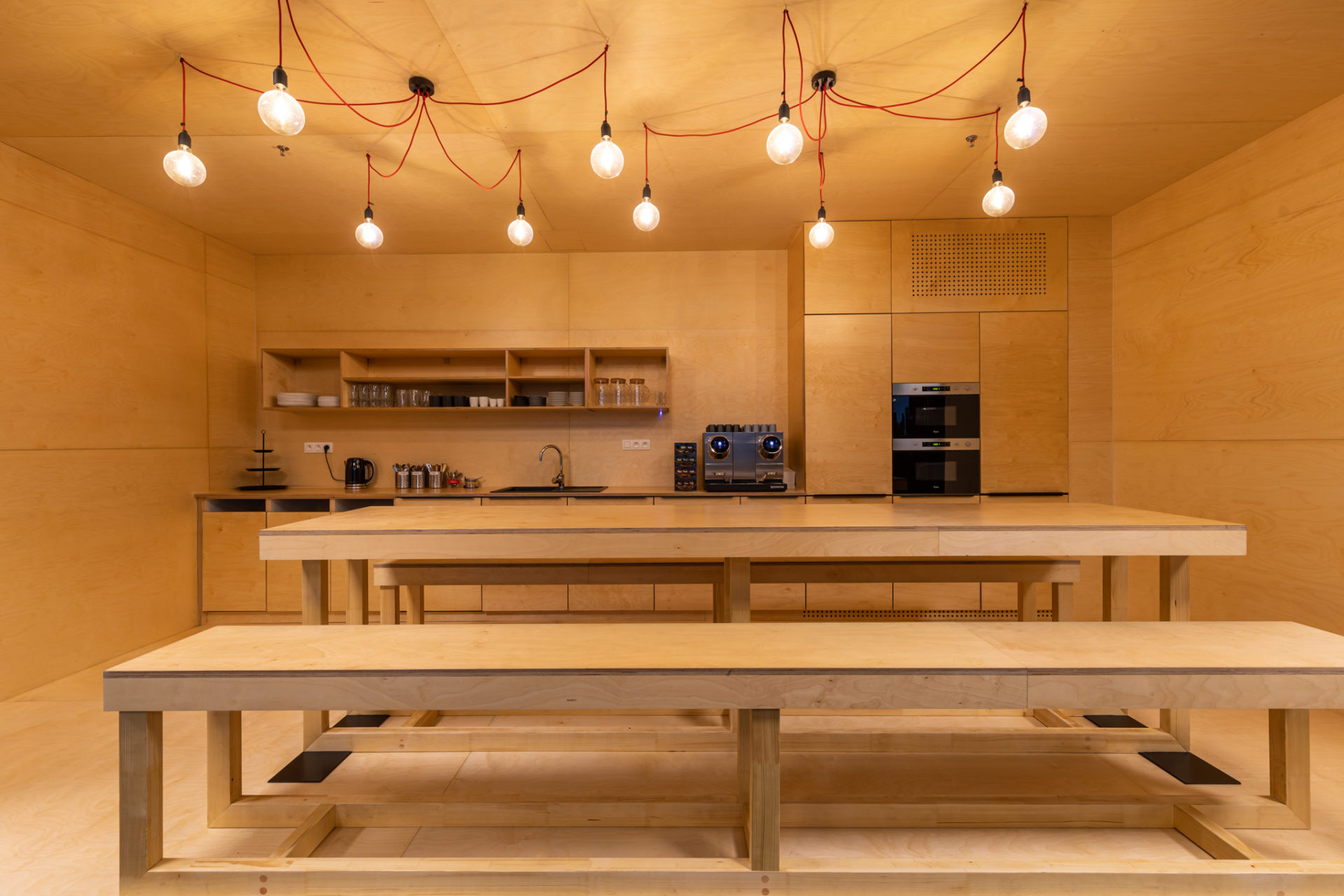 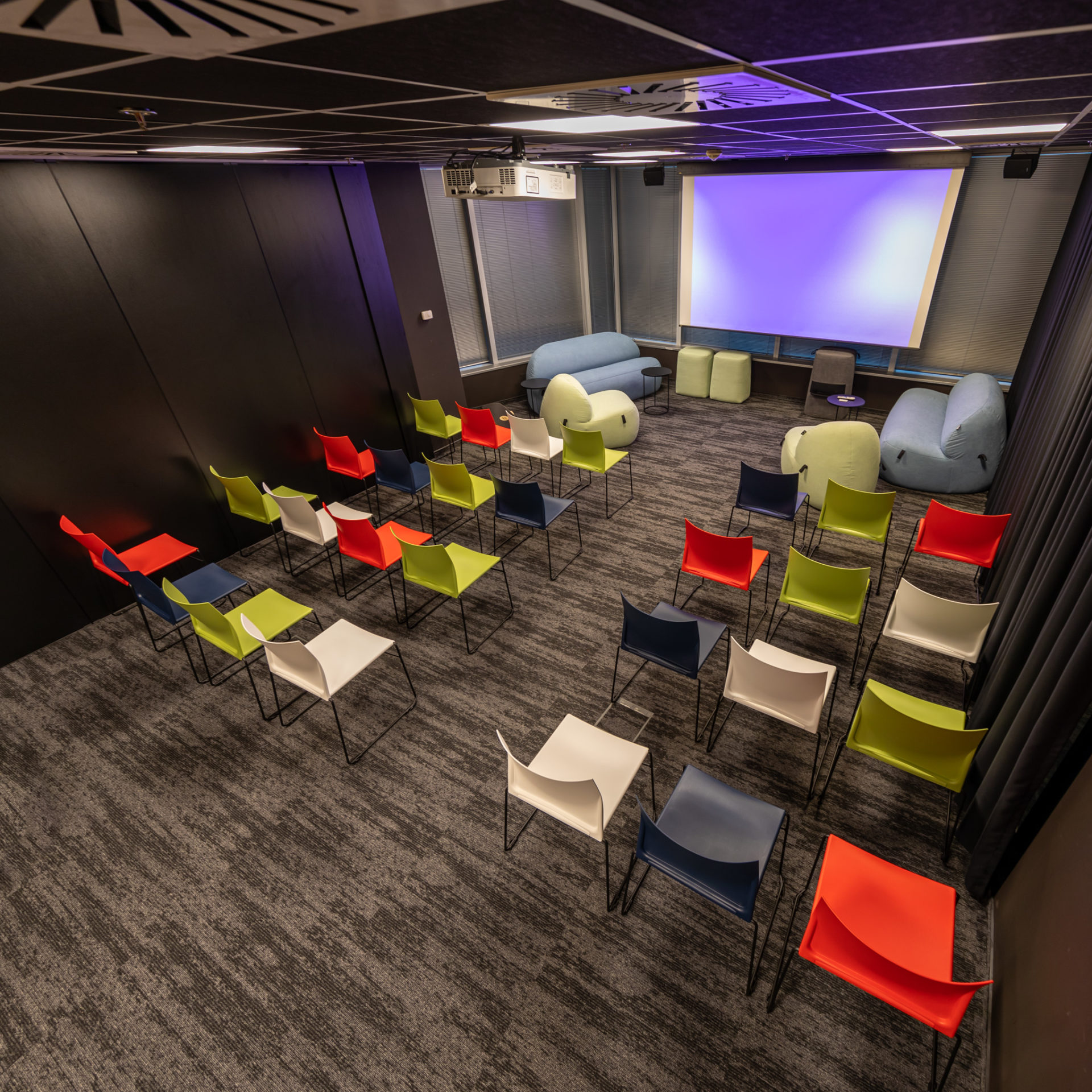 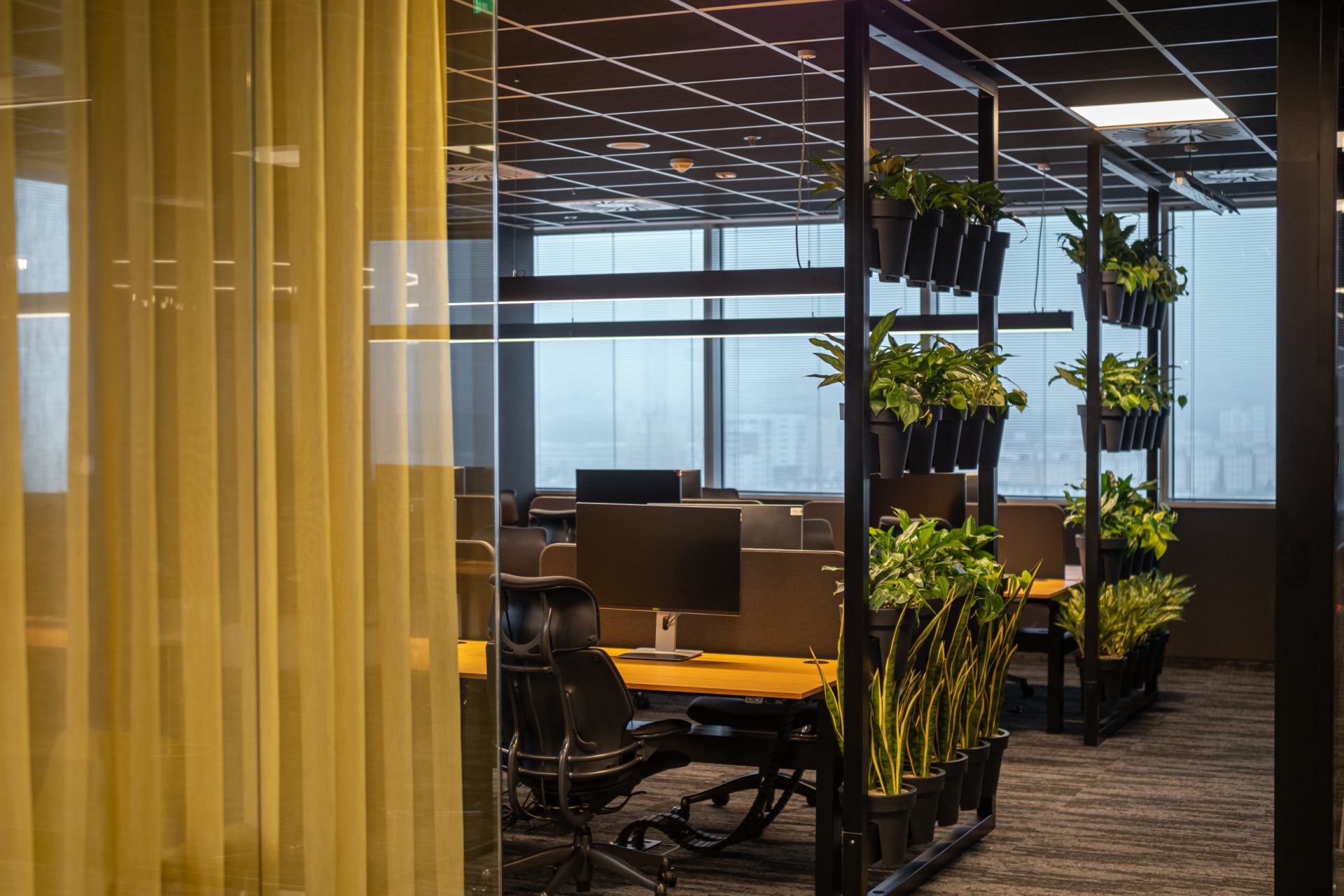 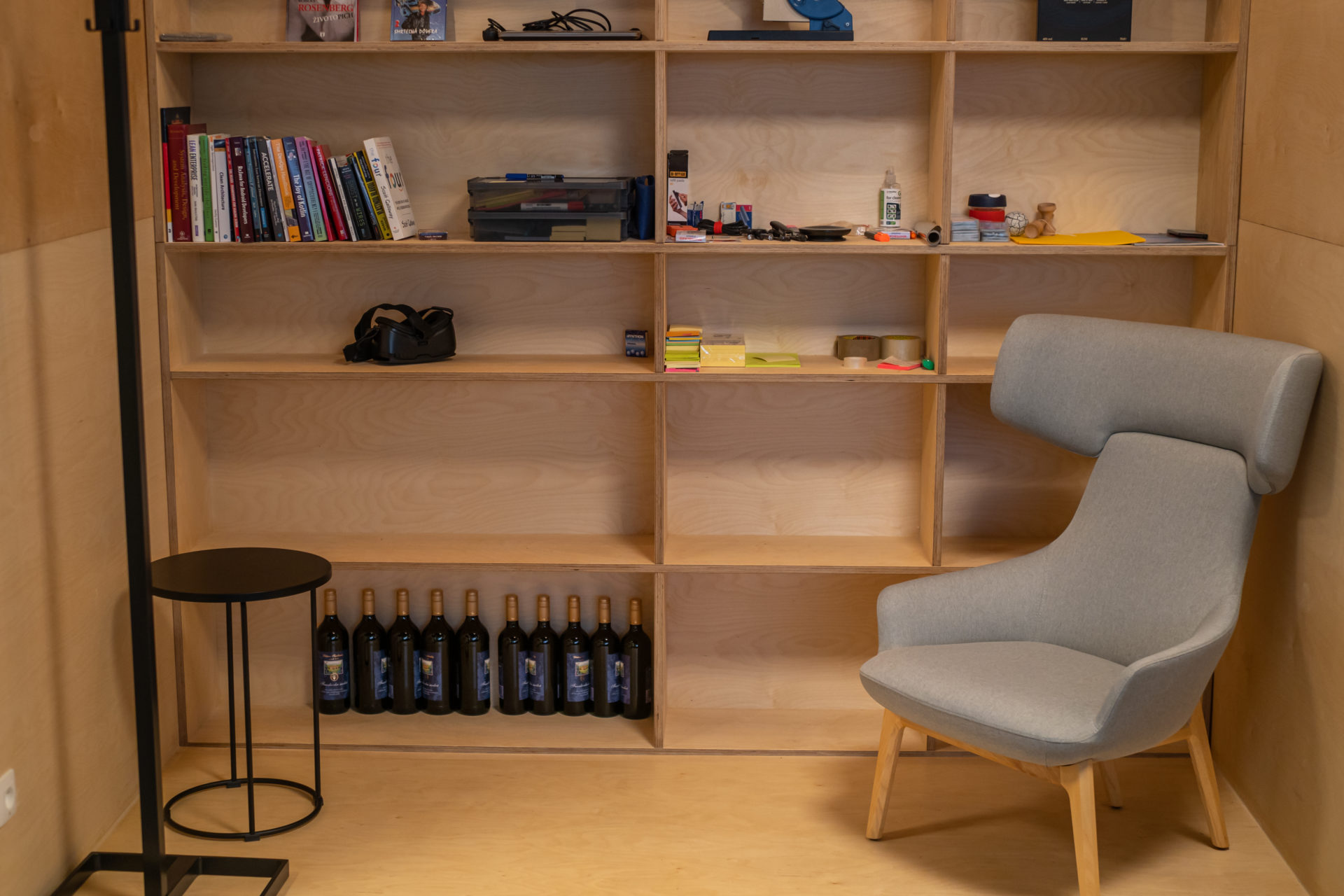 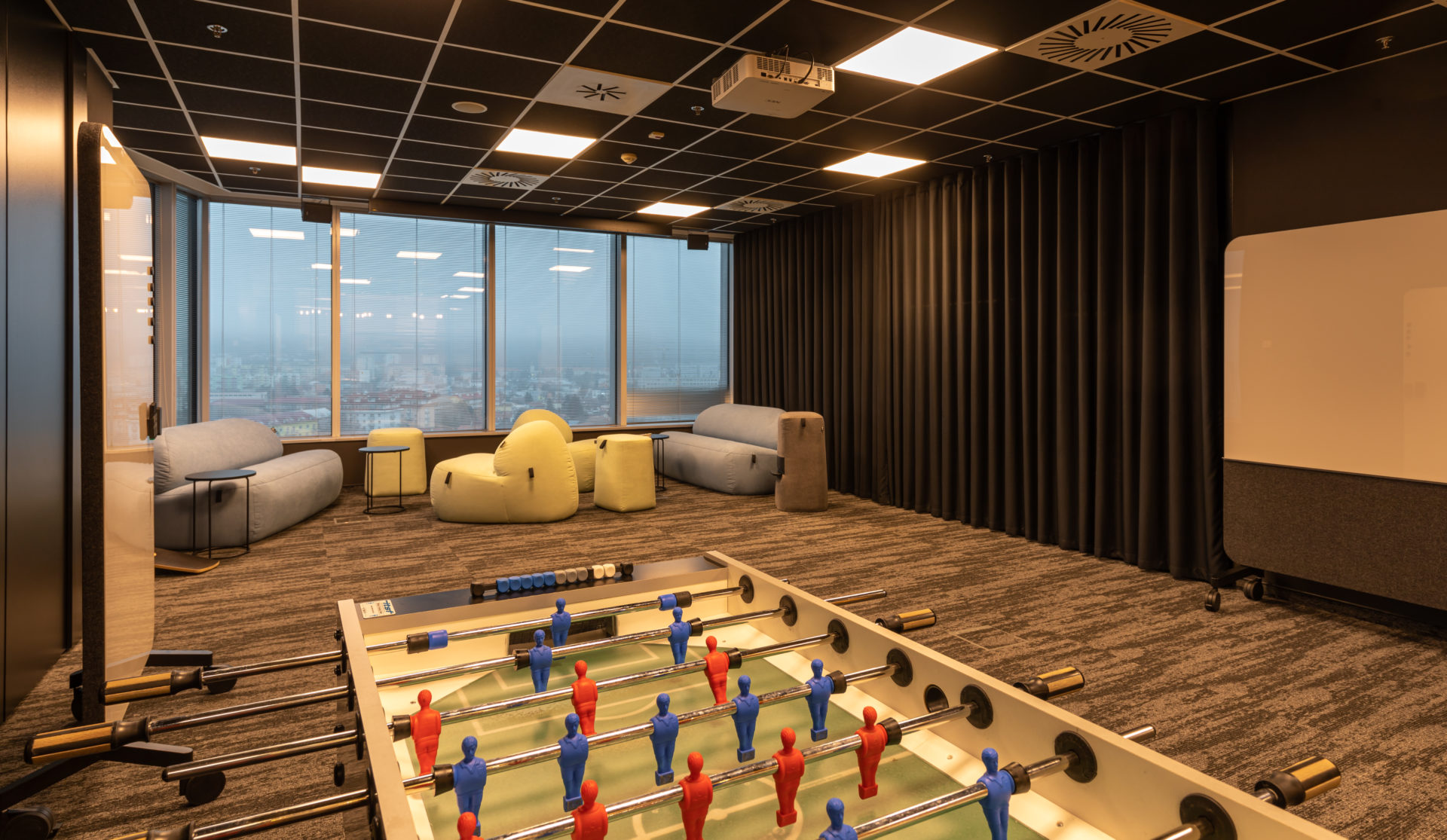 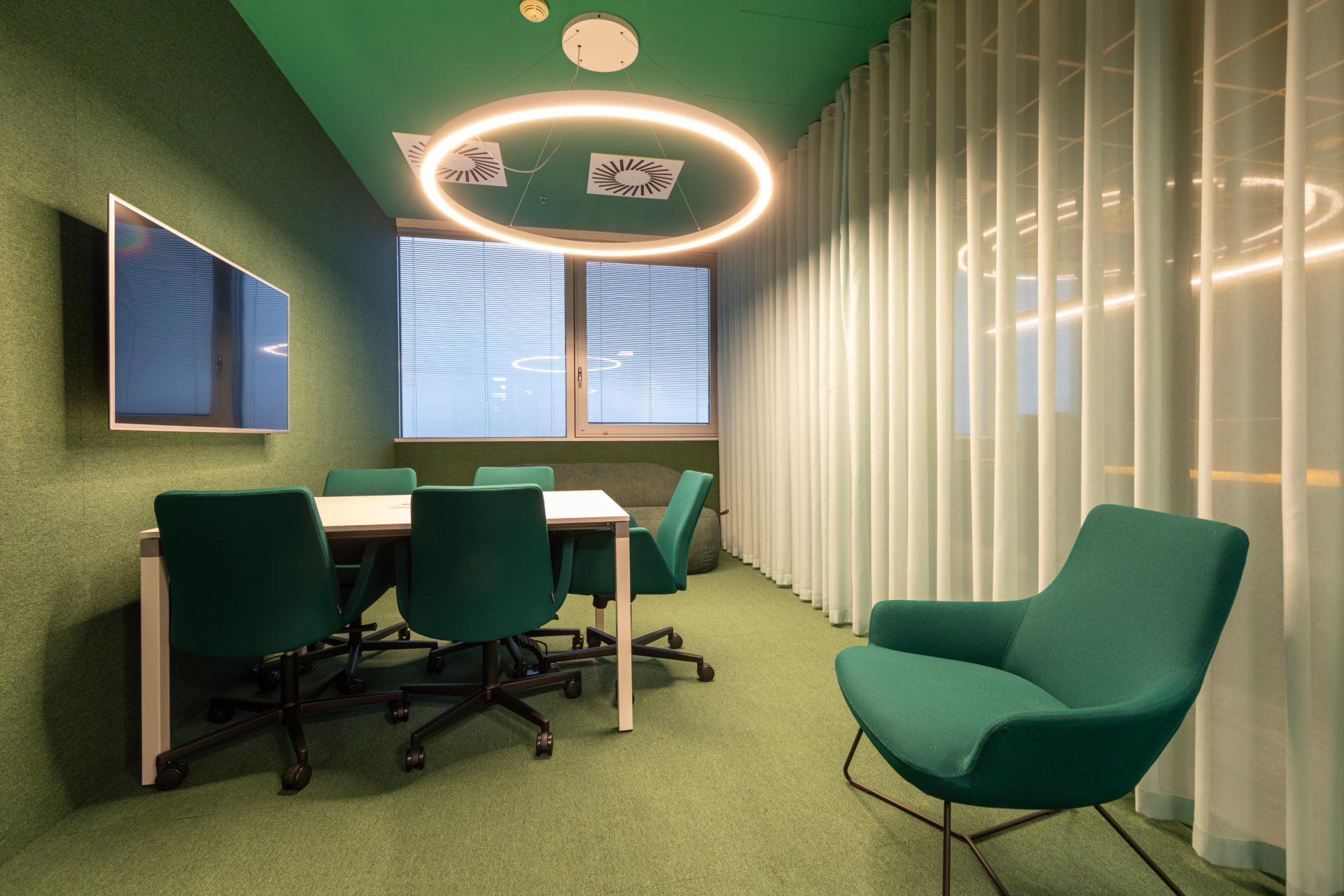 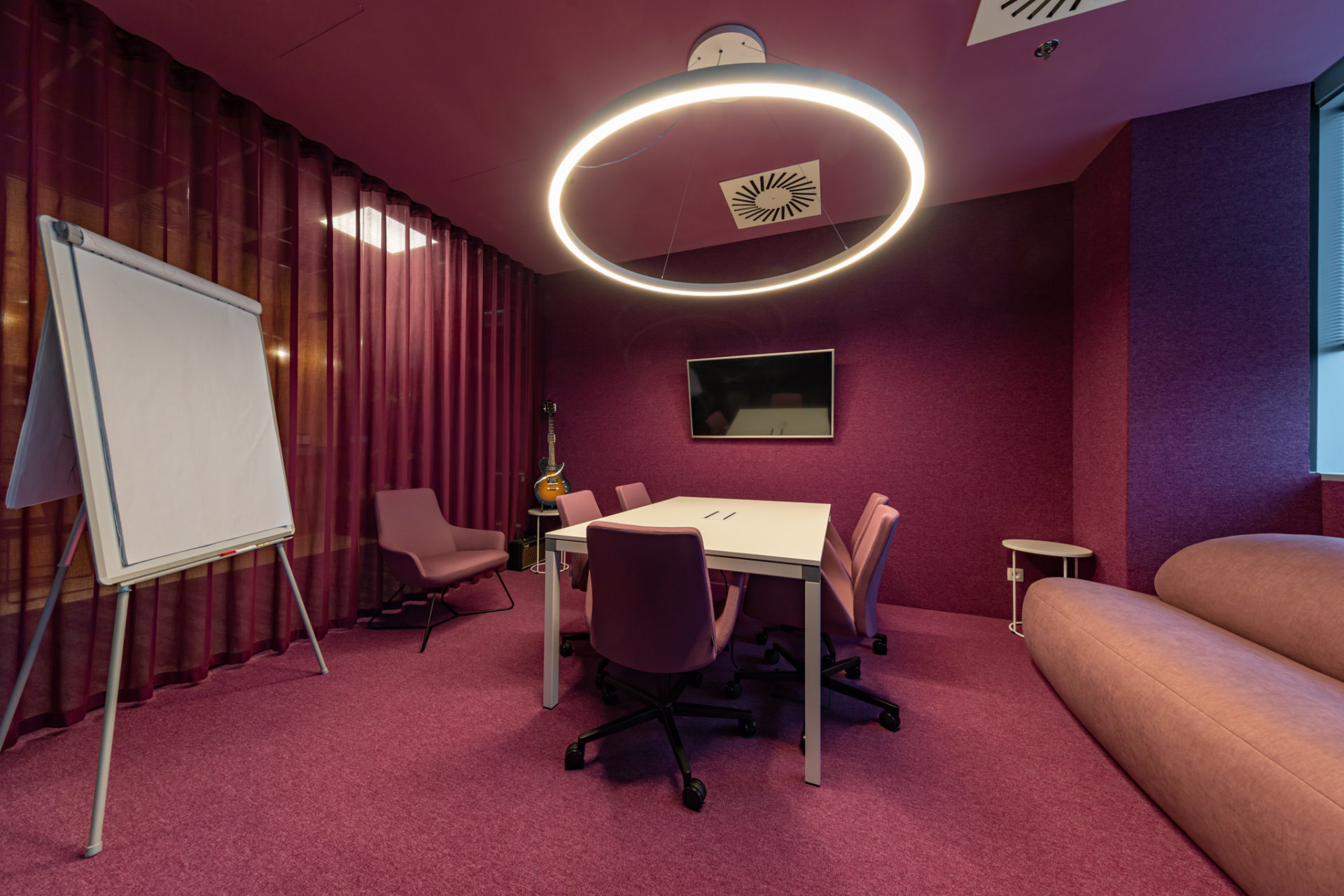 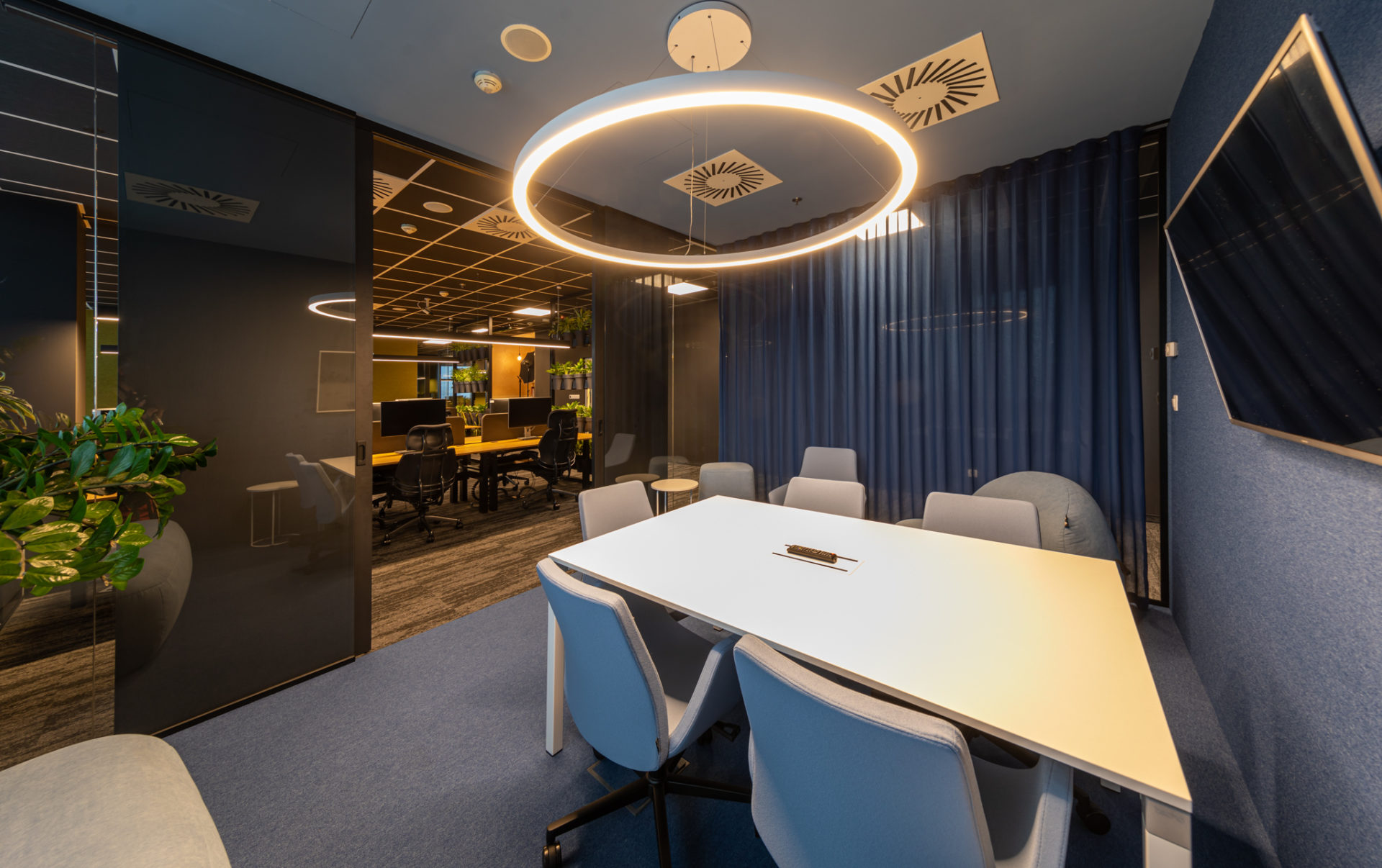 The client’s assignment, combined with a request from the IT staff, was to create an enjoyable workspace from the existing uniform office space located on the 11th floor of the Lakeside Park office building.

The layout of the interior resulted from the daily operations of this part of the company that is based on the division of employees into several working groups. Therefore, the originally large and noisy open space was replaced with several smaller workspaces, called squads in corporate jargon. Each squad has its own small casual meeting room, which is used for meetings of the respective working group, but also as a chill out zone. The meeting room is visually connected to its squad via glass partitions, with one solid wall enclosing this space from the neighbouring squad. Employees have the opportunity to close it off with a double leaf sliding door which has a whiteboard surface on both sides for writing during meetings, or for communicating via notes. In this way, workspaces alternate with chill out zones along the entire glass façade. In order to avoid a “corridor effect”, the meeting rooms are open in the direction of the main passage through glass partitions and, if necessary, can be separated from the corridor by thin curtains visually closing off the space but, at the same time, enabling the depth of the space itself to be seen. The focal point of the whole space is a large kitchen with a leisure zone with a view of the city and the Little Carpathians which can be closed and is used for various events for the whole company.

The dominant colour of the entire interior is black which is used not only on the floor, but also on the walls up to the plasterboard ceiling. There were several reasons for using it to such an extent. One of the aims was to dim the excessive sunlight passing through the glass façade, resulting in the need to keep the blinds drawn when working on a computer. To eliminate bright areas that multiply it by reflecting it into the space. On the other hand, there are chill out zones with distinctive colouring which give each squad its own colour identity. At the same time, lit green walls stand out from the black interior, bringing the element of greenery to the office environment in the form of flowerpots placed on a vertical steel structure. The kitchen and library areas that serve all employees were created as wooden niches inserted into the black interior. As part of the squads and their meeting rooms, a carpet was used on the solid walls which significantly improved the acoustics of the entire space. 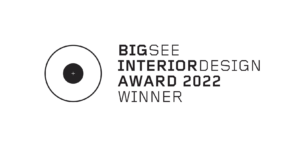